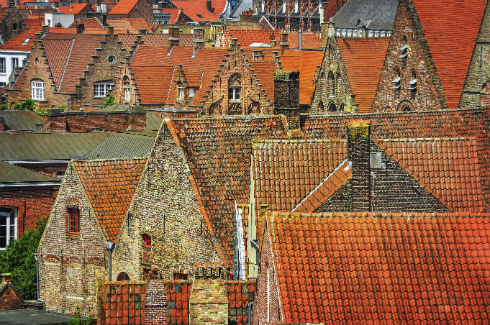 Roofing—A Brief History of Where it All Began

We can learn a lot about how roofing has advanced over time in both creativity and technology by looking at past civilisations. Here is a brief history of the origins of roofing, and how roofing has evolved into the modern day.

Neanderthal man did live in caves, as the excavation of this cave in Italy shows, but in many areas of the world, they also built shelters. According to the English Heritage organisation in the UK, people in the Palaeolithic and Mesolithic periods in Britain built shelters with wooden frames, and roofed them with animal skins!

As this backgrounder from the US National Park Service states, the Chinese were using clay tiles as a roofing material in 10,000 BC. Tiles were also used in the Middle East around that time, and their popularity spread across Asia and Europe. The ancient Greeks, Romans, Egyptians and Babylonians all used tiles to keep buildings weather-tight. Clay or terracotta tiles are still widely in use around the world today, and are prized for their resistance to wear, and their thermal properties.

According to the British Archaeology magazine, the use of thatched roofs in Britain dates back to the Neolithic period. All buildings were thatched up until medieval times. Some Roman buildings were tiled, but thatch remained a staple roofing material. During the Norman period, authorities banned thatched roofs in many areas, because of the fire risk. In Britain, thatch was commonly made of wheat straw, which was readily available. Thatching is considered an art form today, and there are many examples of thatched roofs that can still be seen across the UK.

Although clay tiles were being produced industrially by the 19th century, asphalt also became popular due to its lower cost. Asphalt continued to be a popular roofing option for the next 150 years, when concrete roof tiles were created. Pigment was added to the concrete to give them a similar look to the more expensive clay tiles.

During the 1960s, Germany developed the green roof system. These roofs had a layer of soil that was placed on top of the roof structure and then covered with plants. Although they might sound reminiscent of the famous Hanging Gardens of Babylon, they were quite different. Where the Babylonians used impressive arches and domes, the German roof gardens were typically flat or only mildly pitched.

Technological advances in roofing continue, and modern roofing options include smog-absorbing tiles, solar tiles, and even visually sheer roofs made from glass polymer. With emerging environmental and energy saving concerns, consumers are becoming more ecologically savvy, and roofs of the future will most likely be made from products and roofing materials that are earth-friendly and contribute towards energy efficiency.